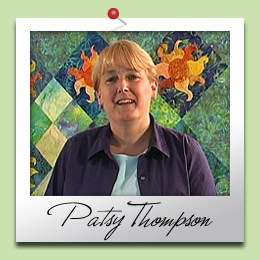 Patsy Thompson was raised in an eastern suburb of Cleveland, Ohio and enjoyed many types of craft work from an early age. She first learned to sew in a six-week sewing course at the local Singer store, and she’s been hooked ever since! Initially a self-taught quilter in the late 1970’s, Patsy’s early ignorance of many of the rules of quilting led her down some new paths of discovery, learning all the joy and exhilaration that come with experimentation. Subsequent classes in numerous quilting techniques have fueled her fire and she now delights in the challenge of placing a new “spin” on different techniques.